The City of Manistee has some of the finest parks and recreational facilities around, encompassing over 180 acres. The City Parks Department is responsible for maintaining all of the city’s parks, park facilities, the Riverwalk and beaches. Summer is an especially busy time for the department, when the demands of growing grass and summer traffic necessitate the hiring of a seasonal crew to meet the demand for maintenance. The department strives to maintain city parks to the greatest degree possible and is constantly addressing areas that need repair or attention.

The City has two beaches on with breathtaking views of Lake Michigan. Douglas Park is the largest recreation facility in the City and is home to First Street Beach. The south riverwalk that runs along the Manistee River Channel connects the park to beautiful Historic Downtown Manistee.

Fifth Avenue Beach is home to the Manistee North Pierhead Lighthouse which is listed on the National Registry of Historic Places. The Lighthouse has one of the four remaining catwalks on Lake Michigan. The Manistee County Historical Museum is in charge of fundraising and restoration of the Lighthouse. Lake Michigan frontage connects Fifth Avenue Beach to North Beach Access Park. You can see what is happening at the beaches by checking out the beach cams.

The City of Manistee operates three boat launches.
First Street launch is the primary launch for access to Lake Michigan. It is a pay facility. The cost is $10 for a daily pass and $50 for a seasonal pass. Seasonal pass annual stickers are available in November for the upcoming season and can be purchased at City Hall or by mailing a request with a check or money order and the annual sticker would be mailed to you. Annual passes can also be purchased at the First Street and Arthur Street boat launches; however, the actual sticker will need to be obtained by presenting the receipt at the City Hall (Monday-Friday, 8:00 a.m. – 5:00 p.m.) or at the Marina (open daily, hours vary depending on time of year) during their respective hours of operation.

This money is earmarked for repair, maintenance and improvements to the facility and compliance is enforced by the Manistee Police. Please remember to pay for and support these fine facilities!

The city takes great pride in its boat launches. Collectively, they are the best facilities on the west side of Michigan. The First Street launch is constantly being upgraded and improved. Recent work included widening skid piers.

In 2010, the city completely renovated the Arthur Street launch. The addition of an accessible fishing pier makes this a great asset for the whole area. Finally, the Ninth Street launch is proposed for a makeover once grant funding can be secured.


The City of Manistee has the best Riverwalk in Michigan. Fully accessible, it follows the Manistee River as it flows through the heart of downtown. The Riverwalk is on both sides of the channel, with the south side stretching 1.5 miles from the mouth of the Manistee River at Lake Michigan east to Manistee Lake. It passes under two bridges and provides easy access to shopping all up and down Manistee’s River Street. Keep an eye out for lake freighters plying the river and delivering supplies to industries upstream. It is an awe inspiring sight. 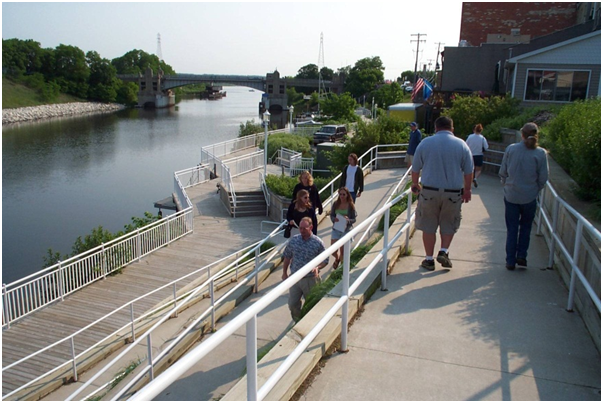 The North Riverwalk was constructed in 1983. There is a universally accessible boardwalk with benches and fishing decks along the riverbank as well as shrubs, trees and grassy sloped areas ending at a gazebo constructed by the Jaycees. Summer concerts are held weekly at the park.


The South Riverwalk runs along the south Manistee River bank behind a major portion of the Central Business District along River Street. The Riverwalk extends east to the U.S. 31 Bridge and west to Lake Michigan. The walkway includes benches, planters, fishing piers, historical markers and a Net Shed Museum along the Riverwalk.

The City of Manistee does not offer any recreational programs directly. Instead, it partners with other agencies to provide these services. Our partners are listed below: